An idle mind is the devil’s workshop 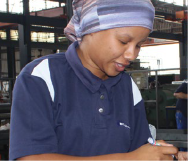 Sitting at home doing nothing and hoping opportunities will mysteriously present themselves is a recipe for disaster, advises 26-year-old Elisma King, who is a Boiler Making Apprentice at H.G. Molenaar in Cape Town, Western Cape.

King completed matric in 2013 at Klein Nederburg Secondary School in Paarl. Not sure of a career choice, she enrolled for a child and welfare learnership for a year, working at a children’s home. “I did this learnership because although I had not decided on a career path, I did not want to sit at home doing nothing.

When I was offered a permanent position upon completion of the learnership, I realised it was not something I wanted to do,” explains King.

What followed was a series of learnerships, including law enforcement and working at a fabric house, as she was on a journey to find her calling. King stumbled upon boiler-making when she accompanied her friend to register at Northlink College.

“I went through their course prospectus and developed an interest in boiler making. I was also encouraged to find out that there are a lot of women doing the trade,” she says.

King explains that part of the reason she could not decide on a career path was that schools mainly focus on white collar jobs rather than artisanships. Before she went to Northlink College, she explains, she did not know what boiler-making was about.

With four years into the training, the young and ambitious King says she is looking forward to her trade test this year, after being thoroughly trained by H.G. Molenaar, with funding from the merSETA.

H.G. Molenaar is the supplier, agent and manufacturer of large-scale machinery for food and beverage manufacturers across the globe. Through their partnership with the merSETA, the company trains and qualifies young people in trades such as boiler making, electrical, fitting and turning, welding and many others.

Having joined the company in 2019 as one of few females in the field, King says she has learnt everything to launch a career as a boiler-maker. “I received a lot of support from everyone since I started working here. There was never a time when I felt inferior as a female apprentice because we are all treated the same regardless of gender,” explains King.

She adds: “I have to admit though, before I pursued it, I had an impression that fields such as boiler-making were meant only for men. However, I soon realised that females can also explore these fields and be equally efficient as their male counterparts. My experience at Molenaar cemented the belief I have always had – where there is a will, there is a way.”