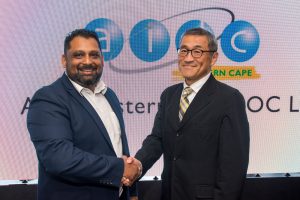 Reflecting the intent to drive localisation and transformation, and broaden the base of automotive suppliers the Automotive Industry Development Centre Eastern Cape (AIDC- EC) has committed to partnerships with two of the world’s leading automotive bodies.

In terms of the agreements JICA and ACMA will assist the AIDC-EC roll out technical training programs to automotive component suppliers at South Africa’s largest auto manufacturing centre. The Eastern Cape contributes to 38% of South Africa’s total vehicle production and 50% of the country’s exports.

AIDC Eastern Cape CEO, Thabo Shenxane said, amongst others, the partnership sought to embed a culture of Kaizen – a global management method that drives Quality and Productivity Improvement (QPI) – into the supply chain.

“The development of Tier 2-4 suppliers will make a major impact on South African Automotive Masterplan 2035 objectives, which targets an increase of 20% of locally produced components in vehicles made in the country”, Shenxane said.

“Presenting empirical results from Kaizen programs at eight Tier 1 South African manufacturers between 2016 and 2019, JICA showed that productivity more than doubled, on time delivery improved from 73% to 95 %, work in progress, in many cases disappeared, overtime work dropped on average from 13.8 hours per week to 4.6 hours per week and lead times improved on average by 40%.”

“The results clearly justify scaling up of Kaizen in the automotive manufacturing sector. And, like JICA, we believe that South Africa can compete with India and Thailand’s automotive component industries, but we must vision and plan for this,’’ Shenxane said.

As a key activity of the partnership, The AIDC-EC and JICA are introducing the Quality and Productivity Improvement (QPI) program to Tier 2 and 3 automotive suppliers across the country’s major manufacturing hubs. Centered around the philosophy of Kaizen, the project, includes the scientific tracking of improvement data attached to Kaizen training.

“We have started the process to work with 120 Tier 2 and 3 component suppliers, over the next three years.  This will involve the close analysis of data and training, which will present scientifically proven results that will serve as a further springboard to deepening Kaizen even further into the component manufacturing sector”, Shenxane said.

Additional training will be implemented in terms of the AIDC-EC’s partnership with ACMA to address knowledge gaps and low competence through continuous skills transfer, the AIDC-EC says.

“It has been noted that suppliers of all sizes have realized the effectiveness of blended learning approaches, where employees have the opportunity of engaging in both hands-on and virtual-based learning. This provides unique opportunities for training and will enhance networking and automotive related activity between India, Japan and South Africa,” Shenxane said.

Toyota Wessels Institute for Manufacturing Studies Director, Dr Justin Barnes underlined the importance of cultivating manufacturing in the context of the country’s very poor performance. According to Barnes, Manufacturing Value Added per capita (MVA) barely grew in 30 years between 1990 and 2019.  Manufacturing contributed 12% of South Africa’s economy in 2019, 17% in 2000 and 21% in 1990.  Moreover, Barnes said South Africa’s manufacturing sector employed more people in 1969 than it does today. “If we had kept manufacturing at 1990 levels we would have employed over a million people more.’’

“The sector is shedding jobs and becoming more capital intensive at a time of employment crisis.  To achieve a high-income society, the driving force is manufacturing productivity and good jobs, whereas the economy is now welfare dependant.”  Barnes noted that the auto industry had performed better than the manufacturing sector at large, increasing vehicle production from 376 000 units in 1995 to 632 000 in 2019 but that the “dark cloud was that local content had dropped.”

Shenxane said the Eastern Cape automotive manufacturing hub “would benefit handsomely from the experience of international partners and global benchmarks that would be used to grow supplier competitiveness, fill skills gaps and increase localisation.’’