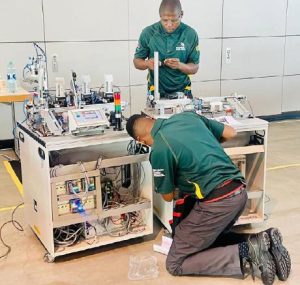 Ford South Africa is proud to have supported two determined learners who represented South Africa at the 2022 International WorldSkills Competition in the Mechatronics Technology category.

The South African team competed in regional and national rounds before heading off to Stuttgart, Germany for the final round, which finished on 8 October 2022.

The WorldSkills competition aims to encourage young people to pursue artisanal vocations as a career choice to help ease the skills shortage in South Africa. One of its primary objectives is to influence the development and employability of South African youth and act as an effective means of increasing awareness of apprenticeships.

Ford South Africa’s involvement in WorldSkills started in 2019 with the sponsorship of automotive equipment, such as engines and gearboxes, required for a national event in Durban. After seeing the immediate impact that WorldSkills was having on artisanal trade and skills development of the youth, Ford South Africa procured the necessary mechatronics equipment required for upskilling learners in automation technology.

As expected, this support continues to motivate and inspire learners to embark on a technical career path and push their professional skills to the limit. This year’s team, comprising Pontso Mashumu and Ernest Ndou, was selected from a group of unemployed NQF Level 2 learners from various colleges in Gauteng. The pair was enrolled into Ford’s Technical Training Centre, which incubates young learners from previously disadvantaged backgrounds to help them acquire mechatronics technology skills up to NQF Level 4. These qualifications can be used to advance their careers within the automotive sector.

Mashumu and Ndou initially took part in the provincial competition during November 2021, which was hosted at FESTO in Kempton Park. With great determination, the team claimed first position in the provincial competition where they were assessed on all aspects of mechatronics and automation systems. In June 2022 the team secured another first place in the following national competition, which included designing Modular Production Systems (MPS) needed to build handling and sorting stations.

This qualified them for the WorldSkills International event held over 12 weeks across Europe, North America, and East Asia. Competing against the very best in the world, the team built MPS stations with three distribution links integrated with Robotino pick-and-sorting modules. Their design was awarded 677 points, which meant they narrowly missed out on the Medallion of Excellence – but managed to rank among the top 22 countries alongside teams from Japan, Chinese Taipei, Singapore, and India.