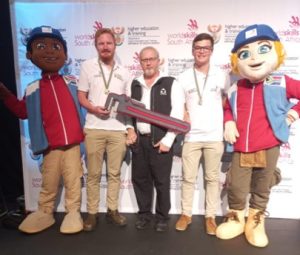 An elated PE College Facilitator, Gerhard Pretorius, said he was thrilled with the outstanding performance of these two young stars who really performed magnificently during the competition. Pretorius is one of the lecturers currently being trained by the German Chamber of Crafts (HWK). The partnership between Handwerkskammer (HWK) Erfurt Germany and eight of the TVET colleges in the Eastern Cape Region has made incredible inroads over the last 12 months in uplifting teachers’ training skills with the support of the Retail Motor Industry Organisation (RMI), a much-valued partner in the venture and the success of the apprentices is proof positive the formula has really worked.

“Access to international trends, through the German Craft Chamber, is invaluable for apprentices, particularly in an environment where skills are valued and provide businesses with a competitive advantage. The more teachers we can train the more apprentices we can help pull through the system and this bodes well for the future of our sector, says RMI’s Training Manager, Louis van Huyssteen. Van Huyssteen, also paid tribute to the Department of Higher Education who organised the competition, saying it is an ideal platform to assess levels of competency and to promote a technical qualification as a viable first choice for many young people. ‘We are facing a critical skills shortage in the industry and welcome any initiatives which can attract and draw in more talent into the sector.”

The automotive motor mechanic trade is one of 13 trades of the national Department of Higher Education (DHET) Centre of Specialisation (CoS) programme.

Sabelo Buthelezi, Chief Director Special Projects Unit for Dep of Higher Education, says, “The excellent skill sets shown during the competition are really encouraging. Our minister has now prioritised this CoS pilot project as a  CoS programme that will be gradually expanded nationally according to set criteria and based on demand. Critically this is a demand-driven training intervention and it is highly dependent on collaboration and input from industry. Facilitator training is one of the key pillars of our programme and the results we are seeing today are evident of the success of the partnership with HWK and retail organisations like RMI. As technology and the sector continue to evolve, we need to ensure these changes are built into our curriculum so that our apprentices can compete anywhere on the world stage.”

The 46th WorldSkills International Competition will feature over 1 600 competitors from more than 60 countries and regions, competing in over 63 skills.