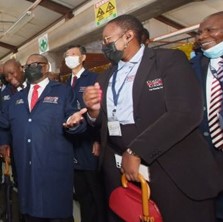 The initiative was borne out of a strategic alliance between the Department of Higher Education and Training (DHET), the United Nations Development Programme (UNDP) South Africa as well as the Government of Japan (GoJ). The fundamental objective of the academy is to promote youth empowerment through vocational training.

“I have always advocated for an increased partnership between our TVET Colleges and the industry as we continuously enhance our curriculum to respond to the needs of the industry. I therefore directed that all our TVET colleges embrace the latest National List of Occupations in High Demand (OIHD) in South Africa which I publicly announced. The list reflects the work undertaken by the DHET, through the Labour Market Intelligence research programme, to support human resource development in our country,” Blade says.

“Youth development is key to addressing address the triple development challenges of poverty, inequality, and unemployment. Honing their skills and unlocking their untapped talent not only promote inclusive and sustainable economic development but also have a transformational impact on society,” according to Dr Dr Ayodele Odusola: Resident Representative for the UNDP in South Africa.

The implementation of the project dates back to March 2021, and since then a series of interventions have been delivered to contribute to South Africa’s economic recovery through various skills development activities and to strengthen the capacity of TVET colleges to align with the post-COVID-19 economy and labour market needs, including the provision of learning equipment.

According to TSAM’s Senior Vice President of Corporate Services Group, Suben Moodley the automotive sector is facing what Toyota Motor Corporation President, Akio Toyoda described as a “once in century period of disruption”. This refers to transformation by a wide range of new technologies, and non-technological aspects such as social, economic, and environmental factors are part of our future landscape.

“Equally important, soft skills such as resilience, flexibility, problem solving, and creativity will be highly valued. This aspect should not be underestimated and needs to be included into educational training programs. So, the challenge is not just technical skills but a combination of soft and technical skills,” concluded Suben.