My background motivated my success 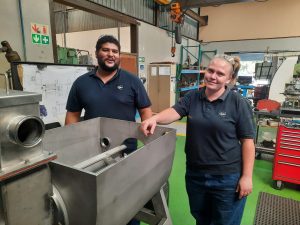 She grew up surrounded by drug users, gangs, violence and emotional abuse, but Ilse Venter refused to “‘jump on the bandwagon” and instead endeavoured to build a successful future for herself. She is now a qualified Fitter at John Bean Technologies in Cape Town, Western Cape.

Venter was born and raised on the “rough side” of Kraaifontein, which she says was drug-infested. Her parents divorced when she was young and she lived with her mother and two brothers, whom she explains became severe drug addicts and would steal and physically and mentally abuse both her and their mother.

“Having grown up the way that I did, I learnt early on that nobody owes me anything and so I defied the odds in order to create a better life for myself. This was through hard work, a positive attitude and self-motivation. My circumstances have always been the biggest motivator to better myself, but now that’s all behind me. I am determined to become a highly successful individual and one day when I have a family, be in a better position to provide for them,” explains Venter.

Through funding from the merSETA, Venter received apprenticeship training through Bellville Technical High School and John Bean Technologies. She attended a six month course at Bellville Technical High school, where she learned basic hand skills and did practical training on basic hand tools and the central lathe. She then completed on-the-job training at John Bean Technologies, where she was taught the more complicated side of her trade, such as making intricately machined parts on the centre lathe, milling machine as well as assembling and installing machinery.