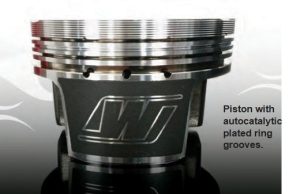 Cylinder sealing is affected by each component in the cylinder kit. The piston and rings are of course major players in achieving optimal cylinder sealing, along with cylinder bore geometry and honing finish.

For this discussion, we will be concentrating on the influence the piston and ring groove has to cylinder sealing in high performance applications.

Blow-by gas leakage past piston rings will follow the path of least resistance and without preference. It is often assumed that if an engine has excessive blow-by, the gas leakage is predominately occurring between the outside peripheral surface of the ring and the cylinder bore.

While this is true in many cases, there can be other less obvious reasons for the leakage that will contribute to blow-by as much or more than the interface between the outside peripheral surface of the ring and the cylinder bore itself.

Here are a few other examples of where blow-by can originate from and what can be done to address this leakage.

Piston ring microwelding can be defined as adherence of minute particles of aluminum from the piston ring groove side surface to the bottom of the piston ring surface. It can cause substantial blow-by gas leakage and can be easily missed during engine teardown inspection.

It can be caused by, among other things, a combination of high temperature, friction and inadequate lubrication. The result is significant damage to the bottom of the ring groove caused by the development of minute local welds between the bottom sealing surface of the ring and ring groove.

This often looks like very minute dots or smeared aluminum paint on the bottom sealing surface of the compression ring and is easy to overlook if not closely examined.

Because the lower flank of the ring groove and the lower surface of the piston ring play such an important role in sealing the blow-by gas, even a small amount of microwelding will immediately increase the entry of blow-by gas into the crankcase.

As soon as the microwelding begins to happen, a notable increase in blow-by will occur that can be quantified with the use of a blow-by meter.